iObserve: The Astronomical Observing App We’ve Been Waiting For

This is a guest post by Cédric Foellmi, the developer of a Mac App called iObserve. After more than a year of development, starting almost from scratch, iObserve is now a stable and complete app aimed at planning and performing professional astronomical observations.

Like many software, iObserve is the app I would have loved to have years ago, when I was a support astronomer in La Silla Observatory, in Chile. This is my main motivation. Having left research, I am now a professional Mac and iOS developer in a small start-up during the day, and an indie one during my evenings.

iObserve ($12, Free Demo) is an app that I have developed to let you prepare your observations; bringing a wealth of useful information by simply entering the name of an object. 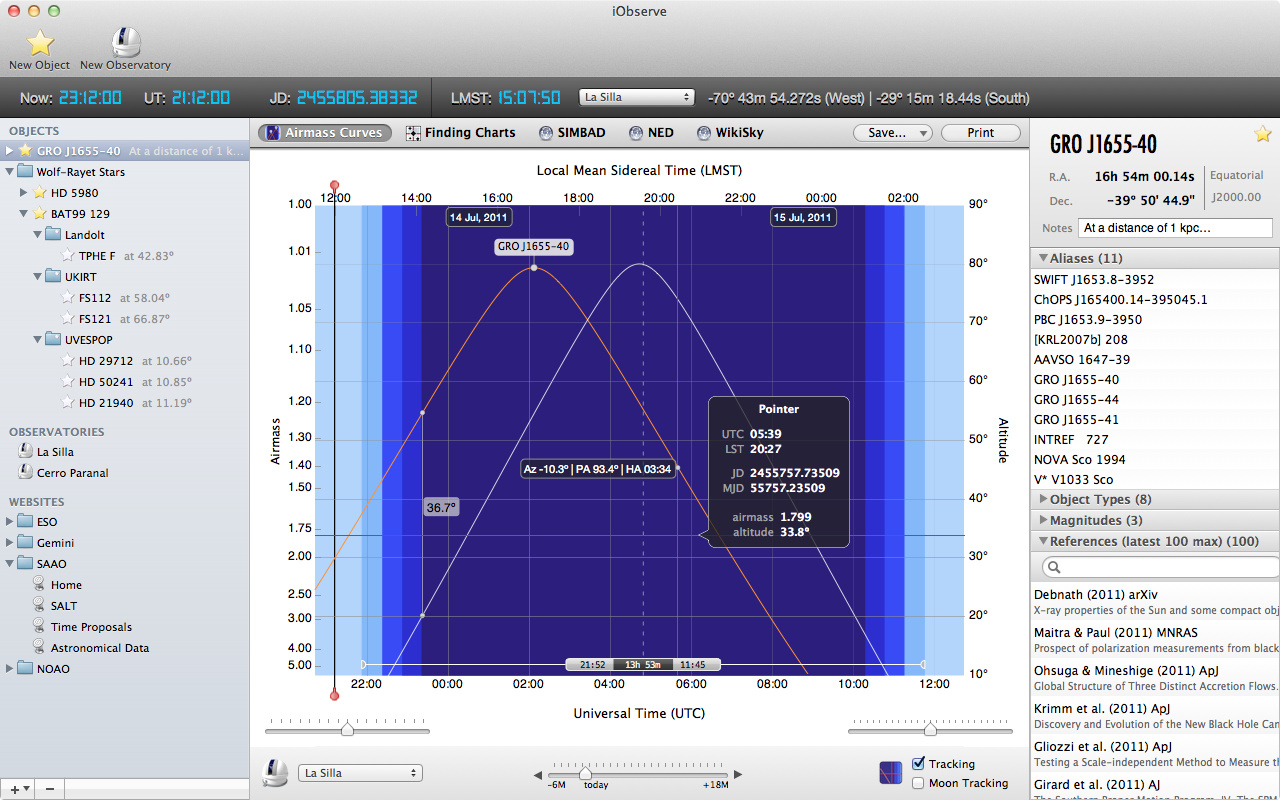 Once entered, its coordinates are automatically resolved and iObserve provides the trackable airmass curve, the closest (currently Landolt, UKIRT & UVESPOP) standard stars, aliases with ViziR links, the latest 100 ADS references, a way to easily change coordinates to celestial or galactic, for whatever epoch and units, and many other little niceties. Of course, airmass curves can be compared and the date of the observing night can be slided up to easily match future observing runs. The night itself can be scaled up and down, and shifted (if you need to observe during the day…). iObserve also provides its famous Times Bar with times of UT, Local, (Modified) Julian Day and the Local Mean Sidereal Time of an observatory.

New in the latest 1.0.5 version are Finding Charts! You can now easily download charts from DSS, SDSS and 2MASS in various photometric bands, with plenty of options. 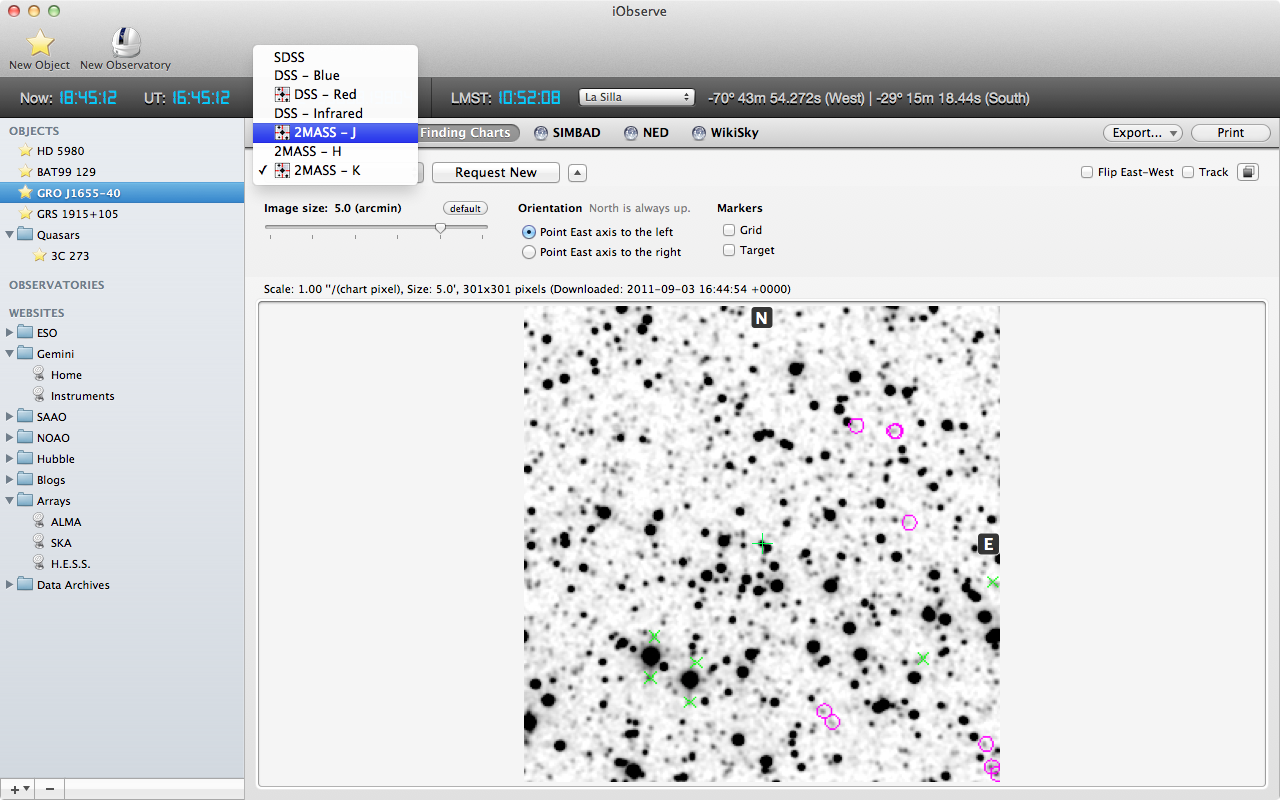 Also new in this version: an “Observatories” section to easily access observatory information, websites, and map. And if you need an observatory that isn’t in the pre-defined list—whether it’s your astro club meeting place or your backyard—you can create your own! 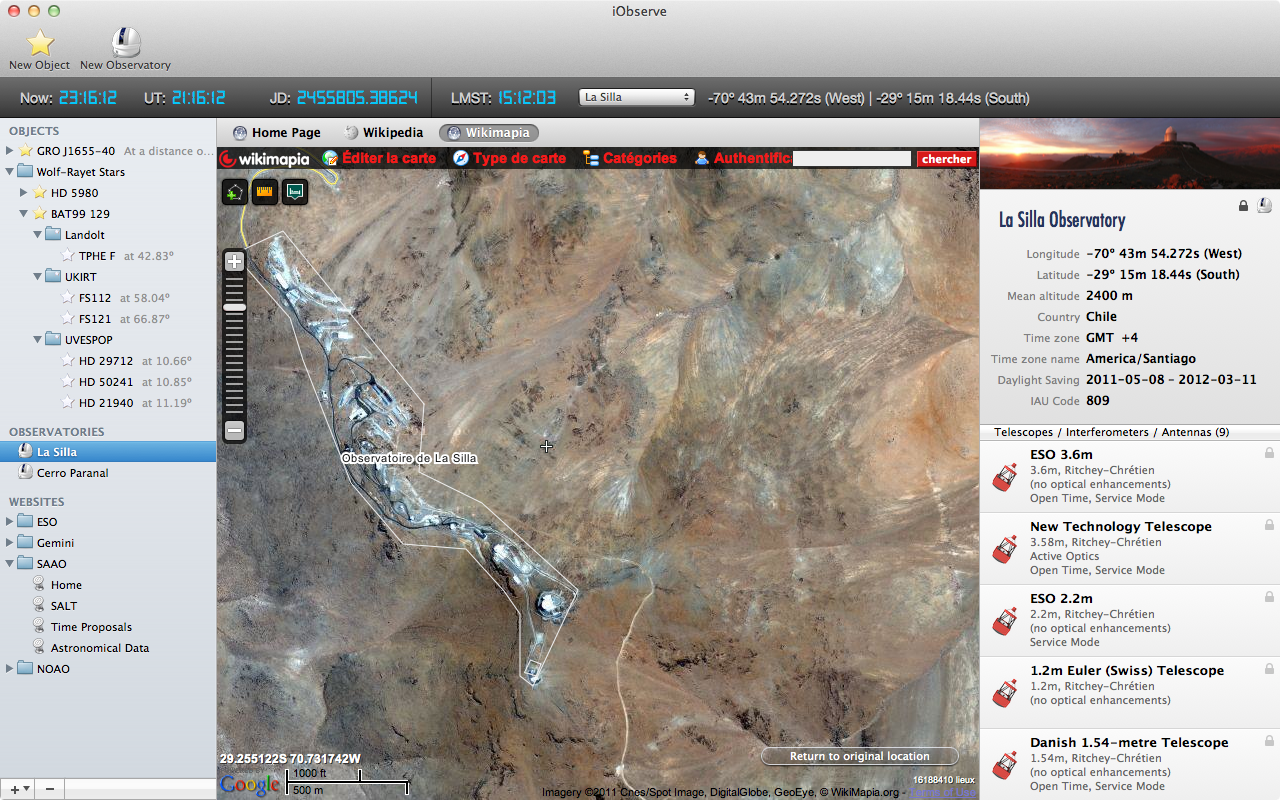 It was my first intention to target a pro audience with this app. But many amateurs would love to have a pro app to make BIG observations with their respectfully-sized telescopes! Hence iObserve is built really with both in mind.

There are many things to come in this app. The desktop version iObserve is available on the MacAppStore, but an iPad/iPhone version is currently under development. it will include iCloud sync with the Mac app. (It will be an app for iOS 5 and up only, hopefully before the end of the year.)

The number of things I dream to include is very large. However, as I only code during my evenings, I try to find a balance between the perfection of a polished app and the number of features. On the other hand, iObserve development is really user-driven. One day I got a mail from a user who said “I am happy with the app, but with Finding Charts, it would be perfect!” I have a development cycle of about six weeks (a bit longer during summer vacations, and for major releases). If possible, I try to include a feature request right away in the current cycle. So don’t hesitate to drop me a line or leave a comment below!

As I write this post, I’ve already started to implement one of the top requested features: comets and asteroids. But the next big things I have already started (capitalizing on work already done) are Observing Runs, Event Streams (ATels, GCN telegrams, etc); Converters (Times, Coordinates, Fluxes, Distances), Observation Simulator (fed by a community-driven platform to share Observatories/Telescopes/Instruments information), etc. Apart from the simulator, all these features are already partially implemented but need to be finished (and that’s where the evil resides).

Ultimately, iObserve should include Night Logs that are written during the night, right in front of you, with all kind of statistics generated at the end of the night and run. The structure of the app is already designed to support that feature. The future is bright. I just need to choose what’s most fun to add first. Let me know what *you* would like to see first!

Huh no, it doesn’t make coffee, and won’t include the famous WMP (write my paper) button. But yes, if there are any financial investors or business angels in the audience who want to contact me — seriously — they are welcome!

P.S. I would like to take this occasion to reach out to the people who are in charge of webservices (or people who know people in charge of webservices). The reason why iObserve doesn’t including comets and asteroids yet, to take an example, is because the interface to JPL’s Horizonshas a web interface and… a telnet interface. Which means I need to make dedicated string parser/checker/wrapper around it. Not only this is time consuming and tedious, but also can lead to errors, and will break the usage of the app if an unexpected/unformatted change is decided on server side. An XML interface would be much more convenient for app development. If you know anybody who can do something about it, that would be great! Here are a few websites (among others) that have this problem: