This is a guest post by William (Bill) Joye at the Smithsonian Astrophysical Observatory. Bill is the primary writer and maintainer of the SAOImage DS9 tool.

We are pleased to announce the availability of the new public release of SAOImage DS9 7.0.  More information about this package (including download links) is available at our website. 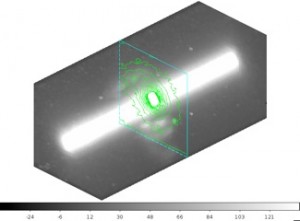 The new module implements a simple ray-trace algorithm. For each pixel on the screen, a ray is projected back into the view volume, based on the current viewing parameters, returning a data value if the ray intersects the FITS data cube. To determine the value returned, there are 2 methods available, Maximum Intensity Projection (MIP) and Average Intensity Projection (AIP). MIP returns the maximum value encountered, AIP returns an average of all values encountered. At this point, normal DS9 operations are applied, such as scaling, clipping and applying a color map.

Rendering time is independent of the actual data cube size. Instead, the time it takes to render is based on how many rays are needed to project the data cube upon the screen in the view volume and the current zoom factor. The new module requires no special hardware or graphical processor unit (GPU) and the rendering time is adequate for interactive GUI manipulation on most computers. The rendering engine is developed using the POSIX thread library, allowing multiple light weight processes to be spawned to complete an image in parallel. The number of threads actually generated is a user specified parameter. Since all modern hardware contain multiple CPU cores, the default value is 8 threads. For larger work stations, this number can be increase. For every doubling in the number of CPU cores available, rendering times decrease approximately 75%.

The new module is support on all hardware platforms currently supported by DS9, including 32-bit and 64-bit versions of Linux and MacOSX, and 32-bit versions of Windows and Solaris. 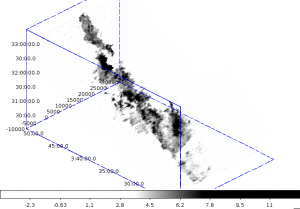 A radio image of Perseus at 12CO.

All 2-D graphics, regions, cross hairs, contours, and coordinate grids, are applied to the current slice, which is selected by the user. When the user wishes to match or lock a 2-D image and to a 3-D data cube, the current slice is used to determine the rendering solution. The user can crop the data cube for all 3 axes via the command line or the GUI. The new module also supports FITS event files binned into a data cube.

All printing support has been extended to the new 3-D module. The user may generate 3-D images in Postscript, JPEG, TIFF, and other formats, just as in the 2-D case. Furthermore, native printing is supported for the Windows version.

DS9 analysis macros have been enhanced to fully support the new 3-D module, allowing the user to invoke external analysis tasks based on the current view parameters and to return results back into DS9 in the form of text, plot, 2-D image, or 3-D image.

For a comprehensive list of other new features, please see: http://hea-www.harvard.edu/RD/ds9/new.html