While I take productivity seriously (even though I might not be seriously productive), I think the highly revered Getting Things Done (GTD) system to be overkill for most folks. To me, the goal of any task management system is to keep your tasks organized just enough so you don’t end up wasting time simply deciding what to do next. I’ve found Cultured Code’s Things desktop and iPhone task management application to be an ideal compromise between disorganized scribbled notes and full blown GTD.

(Warning: Things is not free, but it’s well worth its price…which I won’t tell you tights-wads until the end of the post.)

Things is very flexible and can be as simple or complex as you’d like. Tasks can be associated to projects, areas, assigned due dates, scheduled, made recurring, and/or tagged. But all of these features are bells and whistles and since they are pretty intuitive and described extensively elsewhere (e.g., Macworld, MacApper), I’m not going to describe them all here.

The beauty of this app is that you add tasks when you think of them (they go into the Inbox), spend a little time deciding when you want to work them (moving them to Today or assigning a date they should show up in Today), and then what you need get done TODAY is automatically staring you in the face. Typically, on Sunday night or Friday afternoon, I organize and file my tasks and decide what I want to get done next week. When I get to my desk Monday morning, groggy and unmotivated, I just look at Today and I know exactly what I should be doing. It doesn’t mean I’ll get right to work, but at least I have a fighting chance.

Here’s a screenshot of my Things showing the Today view: 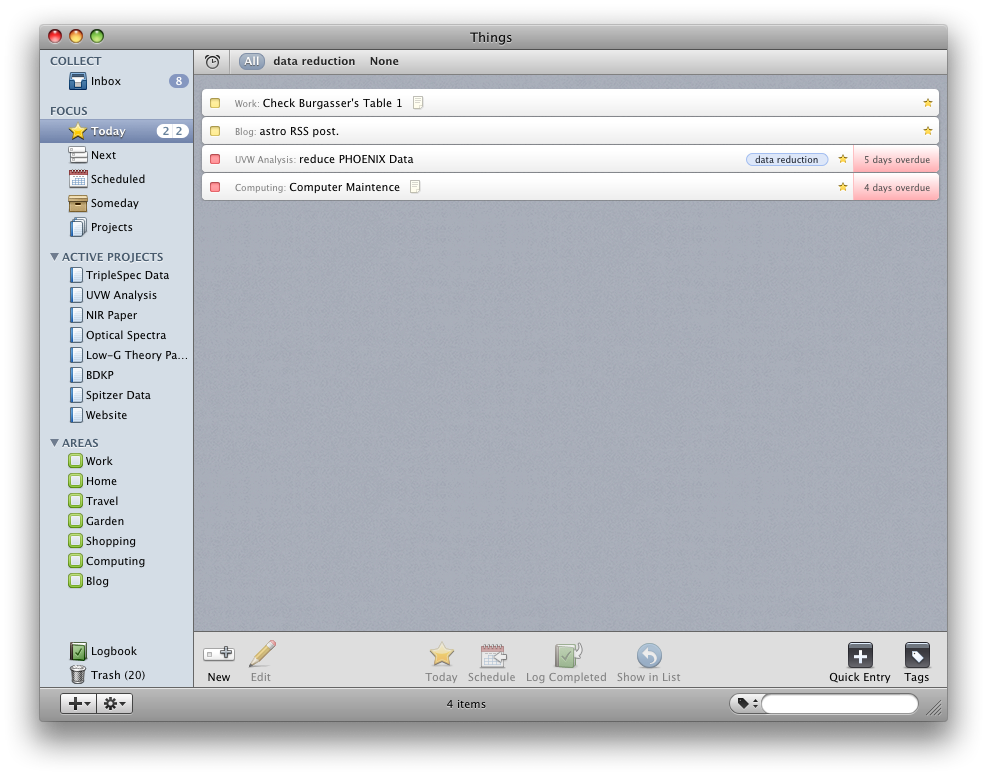 We’re all juggling projects and multi-tasking and as a result, we usually work on tasks from several different projects on any given day. A common problem is that we lose a lot of time constantly switching gears, or just simply deciding which gear to switch into. With the Things Today view, when I need a break from reducing data, my highest priority action items are listed right in front of me and I’m less likely to wander off to catch up on RSS feeds, peruse Facebook, or get sucked into working on a low priority task.

One feature that’s not immediately obvious from the screenshot is tagging. My favorite tag is “plane” for mind-numbing tasks that don’t require internet access or processing power. When I’m sitting on the plane and want to make an effort to be productive for a couple hours, I can easily see what stuff I could be doing that I already put the effort into deciding needed to be done. 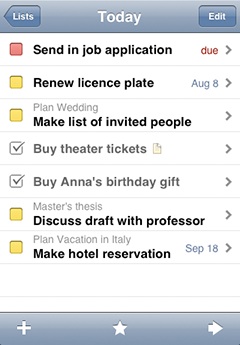 In my task management system, the Things app for the iPhone ($10) is key. Since I’m never without my iPhone, I always have a place to file away that great idea or that small thing I need to do but will likely forget about. It’s a standalone app, not a web interface, so it’s fully functional without an internet connection. The desktop and iPhone apps sync over a wireless network.

Another to-do list tool that people like is Remember the Milk (RTM). Even with all the little gadgets that are available for RTM, I prefer the layout (the UI) and versatility of Things. But, if for whatever reason Things isn’t for you, RTM is a popular, free, alternative.