Tips for a Successful Writing Retreat 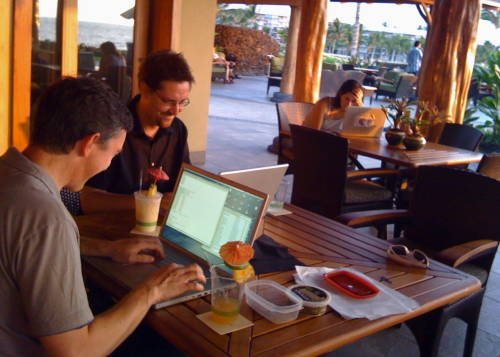 I recently spent four days on a writing retreat on the Big Island of Hawaii with three of my closest friends/collaborators. A writing retreat is basically where you abscond from your office to some resort-like place for a several days (or weeks) to concentrate on a specific task, ideally a paper. I think it’s particularly useful to retreat with collaborators who are usually not in the same place at the same time. You could call it a working holiday or a collaboration meeting (this one is best for the expense report), but since it’s publish or perish, I like the goal of writing front and center. Theorists have the Aspen Center for Physics, but the rest of us need to make it happen on our own.

This was my fourth retreat and it was the best so far. In this post, I’ve compiled a list of what I think makes a successful writing retreat but everybody works differently so be sure to tweak these suggestions for your own group’s needs and preferences.

My favorite place (I’ve been there twice) is Hali’i Kai 6G in the Waikola resort (next to the Hilton). Conveniently located for pre- or post- Mauna Kea observing retreats. It’s nearly perfectly furnished for four people in the living room and the upstairs lanai. There is both wifi and comfortable tables and lounges poolside (but not enough power outlets). There’s also a workout room and tennis courts. Grocery store, restaurants, and A-Bay are all only a short drive away.

Anybody else have good writing retreat experiences? Or locations to suggest?