Code in the Astrophysics Code Source Library is now citeable

This is a guest post from Alice Allen, primary editor of the Astrophysics Source Code Library (ASCL).

Last September, I introduced and described the Astrophysics Source Code Library, a free on-line registry for source codes. I’m happy to report that ASCL is now indexed as a publication by ADS! This provides a reliable and consistent way for codes to be cited and is an important step in giving coders more recognition for their work.

Each ASCL record in ADS shows the title of the code, the list of authors, the publication date (the date the code was entered in the ASCL), the publication (Astrophysics Source Code Library), and record number. The record number is a unique code that is assigned to each citeable entry in the ASCL. Codes can be listed in the bibliography as [author], [year], [code name], ASCL [ascl ID number]. For example: Nemiroff, R. J. 1999, BHSKY, ASCL 9910.006.

For example, searching ADS for the code “Funtools” (don’t you just love that? Funtools! What a great name for a code!) brings up two entries: 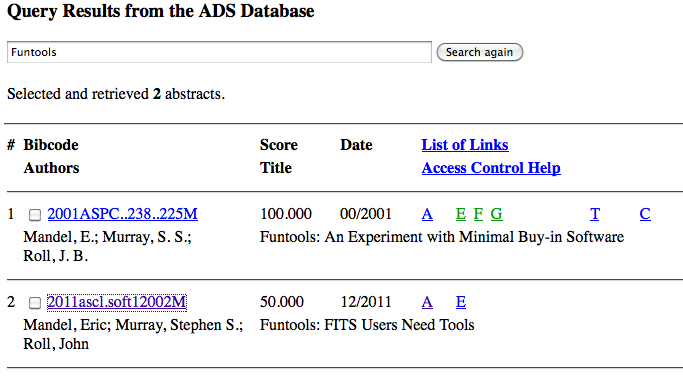 The first result is a conference proceeding but the second one, with the “ascl.soft” bibcode, is the entry for the code itself! Clicking on it brings up the full record: 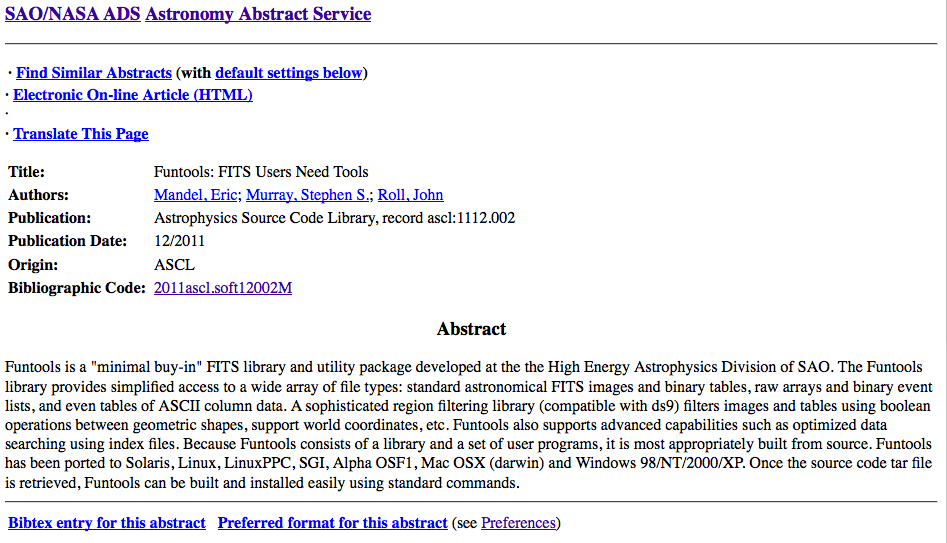 Additional information about the ACSL is available in the online Guide to the ASCL, our poster handout (PDF) and on our new FB page. If the information you seek isn’t there, please just ask!

Also, I’ve started a Facebook page for the ASCL. This page is intended for news updates, general feedback, and answers to questions about the ASCL. However, if people wanted to use it to discuss their favorite code, that would be great too!

And we are of course always looking to add more codes! Suggest codes that need to be added in the New codes welcome thread or post your own.