I’ve recently been experimenting with different methods to collaboratively write papers and proposals. In this post, I’ll review the strengths and weaknesses of ScribTeX. The upshot is I love this powerful, easy-to-use tool, despite a few flaws, and encourage you to check it out.

ScribTeX is like Google Docs, but for LaTeX documents. It’s an online, collaborative, LaTeX editor/compiler that’s seductively simple and powerful. Simply upload a template or start from scratch, and start editing.

ScribTex has two simple modes: Edit and Compile (to create a PDF). So let’s talk about those two modes.

Editing: ScribTeX’s editor is simple and perfectly serviceable, featuring nice readable fonts, contextual color-coding, and a pleasant user interface. It looks like this: 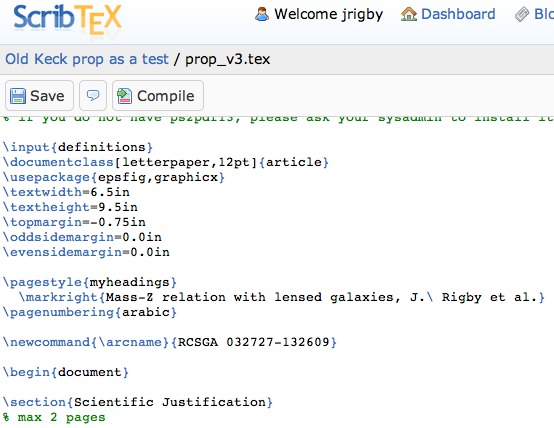 ScribTeX does a commendable job handling simultaneous edits by multiple authors; it almost always manages to merge the changes made by multiple authors with overlapping saves. If you have overlapping saves that ScribTeX can’t figure out, it will show you the different versions of the changes, and ask you to pick. We tested this feature pretty hard: I edited the Introduction, while a collaborator edited the Results, and another collaborator added figures—the “Merge Saves” feature worked great. It doesn’t, however, show you what your collaborators are writing as they write it, like GoogleDocs; you have to refresh the page to see the changes.

Compile: Hitting the compile button runs the latex compiler (your choice of latex or pdflatex), reports the logfile, and outputs a PDF. When it works, this is seamless. LateX to PDF by pressing one button. Ah. However, the logfile feature of the Compiler needs work—it often doesn’t give as much information as I’d like. For example, the logfile lists line numbers for the errors, but the editor doesn’t list line numbers, so tracking down an errant “$” or “%” symbol is a pain.

Uploading and downloading: ScribTeX makes it easy to upload a single file or a zipfile containing a whole project. Thus, you can easily import an existing proposal (last year’s failed proposal, maybe?) or a template. It’s also easy to grab the whole project and dump it back to your disk, in one of two easy ways. The first way is to hit the “Download” button and grab the project as a zipfile.

The second option is to run a one-line Git command on the command line. This is simply gorgeous—you can back up your work along the way as you inch closer to submission; and after the proposal/paper is submitted, you can archive the whole project to your computer.

Adding collaborators: It’s trivial to add new editors to a given project, and edit who can read or edit. 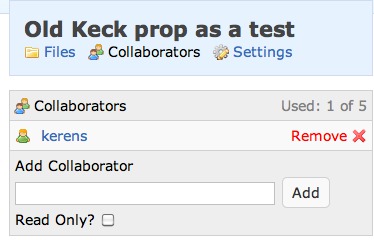 History: ScribTeX keeps track of all changes made by all authors, on a file-by-file basis. So you can see what your collaborators have been up to, who made a given edit, and who was the last person to touch a given file.

There’s a catch—ScribTex is not free. Or rather, the free plan is extremely basic:  only 3 projects, 1 collaborator per project, 50MB storage. I chose the middle plan, which gives 10 projects, 5 collaborators/project, and 600 MB for $6/month. There’s also an unlimited plan for $10/mo. Only one member of a collaboration need pay for a plan. Personally, I think $72/yr was a fine price to pay for the increased efficiency we enjoyed at writing our paper and the follow-up Hubble proposal. After all, my time isn’t free, so despite being a cheapskate, I will gladly pay to recover some time.

I do wish that ScribTeX had a pay-as-you-go plan, since I really only want to use it a few times a year: proposal season and if the paper I’m working on requires a lot of collaboration.

Has anybody else tried out ScribTex and have other pros/cons to share?

In the next post, I’ll compare several different tools to write collaboratively: Google Docs (Kelle’s review), ScribTeX, ShareLaTeX, and Dropbox (Kelle’s review), and seek your feedback about what tools work for you.