This is a guest post by Cédric Foellmi, developer of iObserve, an observing app for OSX.

iObserve, the OSX app designed to simplify your observing runs, is getting a major upgrade. After more than a year of development, many new features are available which should make the app attractive to an even wider audience. Since its inception, iObserve has already garnered more than 550 active users. Given the size of the target market, I am very proud of this result, especially considering that it all started as a dashboard widget! The major new features that iObserve 1.3 brings are new objects (exoplanets, asteroids, and comets) and converters for coordinates, fluxes, times, and distances. Moreover, a beta version for the iPad is opened for testing. 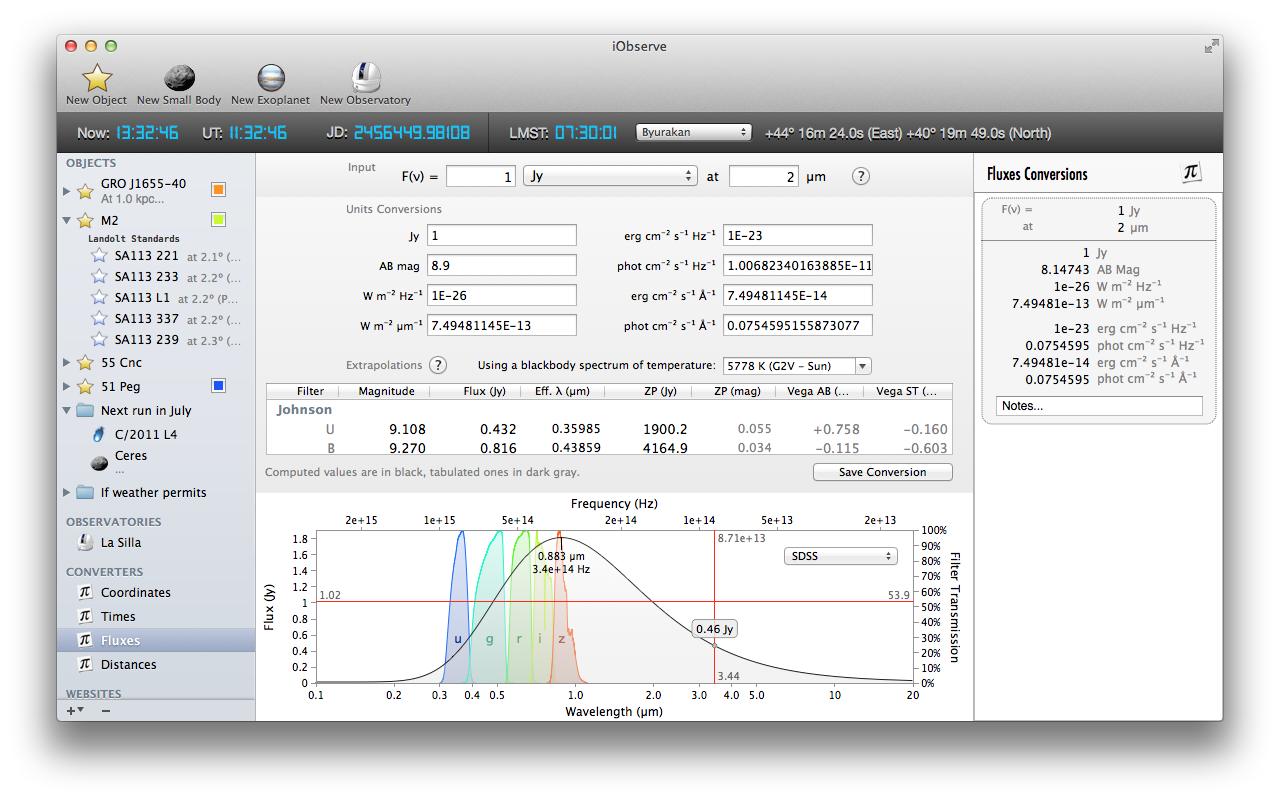 Exoplanets are retrieved from exoplanet.eu1 while asteroids and comets are provided by the JPL Horizons service. Additionally, all objects (including those from SIMBAD) are now automatically kept up-to-date. For each object, iObserve triggers background checks to keep all available information about it, including relevant published articles, up-to-date.

For comets and asteroids–unlike other objects whose positions are fixed–a series of coordinates are downloaded from Horizons, since it’s certainly the best way to ensure they are accurate (the JPL algorithms are a lot more mature than mine). This new type of coordinate triggered some hard work on the app model and pushed for an entirely new way to store objects within iObserve. For those who had some troubles with it, know that iObserve now uses an asynchronous, and much more robust, SQLite-based storage (one of many under-the-hood improvements).

With all SIMBAD, exoplanet.eu, and JPL Horizons objects now directly available in the app, iObserve has you covered, whatever your field of research! Of course, one obvious category is still missing: solar system objects. I know. Be assured that’s on the to-do list. It will take some time though since I plan to implement the coordinate algorithms myself, as I’ve done for the Moon (and its 60 levels of correction…).

The other big development is the Converters! Current users of iObserve know that they have a quick, in-place coordinates converter at the tip of their mouse when they hover over an object’s coordinates. The new version, however, includes not only conversions for any coordinate system, but also a flux converter (big stuff here!) as well as a converter for times and distances. All of them offer the possibility of saving the conversion for future reference and adding notes.

The flux converter makes your observing life much easier. Enter a flux in various units–or a magnitude in any filter band of the major photometric systems (e.g., Johnson, Strömgren, 2MASS, Cousins)–and it immediately does three things for you. First, it converts the input flux/magnitude into all other units. Second, it extrapolates the flux to all major photometric bands using a blackbody curve. And finally, it draws a trackable spectrum plot with throughput curves on top. Of course, the blackbody temperature can be easily adjusted. I plan to include other types of extrapolations such as power laws.

There is another situation where this converter is also very handy. The magnitudes of an object, as provided by SIMBAD, are now understood by iObserve’s model. Hence, a new “quicklook” button is now visible besides the magnitudes when an object is selected and all unit conversions are only one click away.

The time converter provides an easy way to convert between different times and dates. It shows an Earth map with the current night shadow and position of both the Sun and the Moon. Observatories can be pinned on the map as well. The distance converter allows you to distinguish between small (galactic) and large (extra-galactic) distance conversions. A more sophisticated one is planned for the future with more cosmological parameters.

In addition to these major features, there are also many more standard star catalogues, a visibility view, better finding charts with color inversion and export options, and the ability to export/import a bundle of objects to share with someone else, or yourself on another computer. iCloud syncing is not (yet?) available since it is a lot more complex than I expected, especially with various kind of data objects.

iObserve on iPad recently became a quasi-reality. I have been able to adapt most of iObserve’s features into a “touch” scheme. I am willing to make iObserve available down to iPad1 using iOS5 (which is actually the one I have at home). However, I need more beta testers with newer iPads! Your input is very valuable and I will provide a free promo code once it is released if you find a crash or send feedback! So enroll and follow the instructions (you will need to send me your device’s UUID at some point so I can include it in the provisioning profile). My targeted release date is this fall (the Apple way :-)! 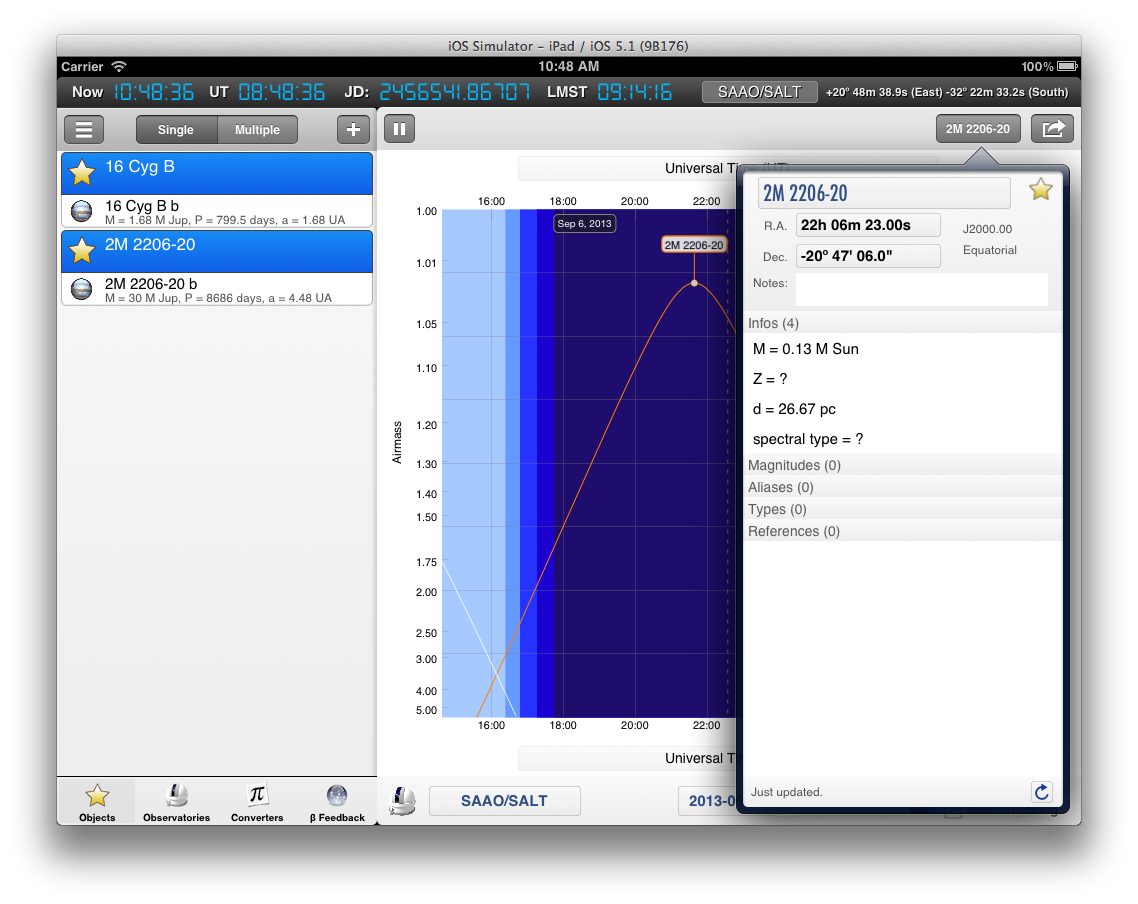 The roadmap I outlined in a previous article remains mostly true. However, since it is a popular subject (given the emails I receive), here is an update. Nevertheless, the philosophy behind iObserve development remains the same: never hesitate to contact me if you think of a great or handy feature!

The next big feature for iObserve is certainly Observing Runs and Night Logs. For those who have followed the story of this app since its beginning, you know it was already partially implemented. The reason why I talk about it in the past is because of Apple’s API changes.2 Observing Runs will provide a place to organize your runs: trip dates, observatory constraints, notes, pictures, and, of course, a list of Night Logs. The latter will offer an easy way to make target lists, observation breakdowns, and statistics. Since I plan to release iObserve on iPad first, these new features will take some time. But iObserve is meant to stay for the coming years.

Once Runs and Logs are out, two major areas remain in my plan: Events and Observatories. The first one is a fairly simple one: it aims at providing a place to receive and deal with alerts, telegrams and events with some automatic parsing of objects names, catalogues, etc (this is where the value of such an app resides…when things become integrated).

The second one, Observatories, is a big one and leads to iObserve’s ultimate goal: an Observation Simulator. My (ambitious) goal is to organize in a meaningful, hierarchical and flexible way: Observatories and Observatory Networks (level 1); Telescopes, Telescope Arrays and Interferometers (level 2); and Instruments, Instrument Optics, and Detectors (level 3). It may take some time. But imagine how useful the app can be just by entering the name of a star!

iObserve has a new hosting website: onekilopars.ec. Apart from being the coolest URL an astronomer can get, this new website (along with new responsible design) presents the whole portfolio of apps, frameworks, and plugins I am developing on OSX and iOS. This replaces my old URL (http://softtenebraslux.com). In addition to iObserve, there are also the known quicklook and spotlight FITS plugins (which are both open source and available on github: QLFits for QuickLook and FITSImporter for Spotlight).

New to the landscape is the BrownDwarf Converter (AppStore Link, already presented in AstroBetter), first developed by Jonathan Gagné at the University of Montréal. Jonathan has transferred the app to me and it has just been refreshed with an iOS7 look (even on iOS6).

Moreover, I also present some screenshots of a new app called Stif, an “iTunes for FITS files”. It’s already in very good shape, but it is still missing some basic stuff such as WCS support. Stif is based on a new Objective-C wrapper around cfitsio which I am writing in parallel. My plan is to make a modern and asynchronous library with Objective-C only APIs that would allow it to be used on OSX and iOS.

And, saving the best of all for the end, the ObjCFITSIO framework is now open source and available on github! Moreover, I am currently refactoring part of iObserve to extract some of its model, to make it open source as well. So keep an eye on onekilopars.ec!

As usual, feel free to contact me for any suggestion, criticism, bug report, feature request, etc. Thanks to all for making the iObserve journey a long one!

1I chose exoplanet.eu simply because I had a contact there. There is no special reason to avoid the open exoplanet catalogue. I could also have used the excellent exoplanets.org.

2For the developer-oriented readers, table views used to be made of cells – for which I implemented tons of things in the past – but are now cell views. This makes life a lot easier but I have to restart a big fraction of the existing stuff.