The “Gray Zone” of Academic Ethics: Results and Reactions

This is a guest post by Caitlin Casey (IfA, Hawaii) and Kartik Sheth (NRAO) who recently hosted a “Diversity and Ethics” Seminar at the Aspen Center for Physics.  This post is a follow-up to their Ethics and Diversity Poll.

Thanks to all astronomers who filled out the “Ethics and Diversity” poll back in September.  We hope it was an interesting and fruitful exercise in assessing social interactions and an opportunity for you to reflect on your own judgement and how it might differ from others’.  If you haven’t taken the survey and don’t know what we’re talking about, take a look at it here; it describes 25 hypothetical scenarios and asks you to rate them on a scale from unethical to desirable.  We got nearly 500 responses and an enormous amount of detailed feedback, leading to a follow-up piece that was published last week as a Careers column in Nature.

Before summarizing results, we wanted to describe a bit more of the motivation, which was purposefully left out of our first post.  This exercise was borne out of the community’s growing concern for diversity and ethics-related issues, from the Astronomers’ Facebook page, Astrobetter, the Women in Astronomy blog, and discussions of the AAS Committee on the Status of Women in Astronomy (CSWA).  In May, many astronomers at an Aspen Center for Physics workshop were discussing how we could enact cultural change to make our community more inviting and inclusive of underrepresented groups and build a more positive, healthy work environment for all.

A small group of us started recalling ‘scenarios’ from our own lives in which our colleagues either intentionally or accidentally overstepped boundaries; to us, it was obvious there was an ethical breach, and that breach might have motivated us to think differently about our career choice, but to the “offenders” it might have been completely different, just another day on the job, not a big deal, and maybe even long forgotten.  We thought, “Hey, wouldn’t it be great if we could discuss these hairy scenarios with both junior and senior people together, so we can try to link everyone’s point of view?”  So Kartik and I started to write down scenarios from our own experiences and gathered those of others at the workshop until we had 25 (many more started to come out of the woodwork as word spread), then changed the names and revealing details to protect everyone’s identity.

Later at the Aspen meeting, we held a dedicated 2 hour session on diversity and ethics, the first hour of which was based on sorting these 25 scenarios on a continuum from “best” to “worst” relative to one another (the continuum was labeled “desired – acceptable – undesired – unacceptable – unethical – illegal”).  About 50 astronomers attended; we split them into two groups and, within a group, handed each person a different scenario on a slip of paper which then became theirs to contemplate and place on the continuum where they thought it fit.

We asked that people take 10 minutes to rank the scenarios with respect to one another on the continuum (like a “Q sort” often used by psychologists & social scientists to gauge public opinion in a task analogous to having 25 people alphabetize themselves in a line).  At the end of the sorting period, the two groups had reached an independent consensus as to the relative desirability of the events at hand. We then discussed the ranks and how the two groups had judged scenarios differently, all the while asking, “is this the kind of behavior we want in our community or not?”  At the end of the exercise, we asked participants which scenarios they thought were real and which were fabricated.  Revealing that all were in fact real left at least a few stunned faces.  After revealing the truth behind the scenarios, the in-person feedback on the activity was great; previous “skeptics” came forward admitting that the exercise was eye opening and forced them to think differently about their own interactions.  Some came forward admitting the scenarios were all too real to their own experiences, and they were pleased that they were being publicly acknowledged.  To reach out to a wider group of astronomers, we decided to bring the exercise to Astrobetter, phrasing the scenarios as hypothetical to mimic the exercise in Aspen.  We also decided not to request demographic information as that could impact responses due to stereotype threat.

We’ve been overwhelmed by the community’s online response; over 500 astronomers participated in the online survey, with over 25% contributing free-response answers explaining their thoughts on individual scenarios or the survey as a whole.  Here we present the relative ranking of the scenarios and highlight some interesting participant reactions; if you want to re-familiarize yourself with the scenarios, go here.

Online participants thought that the four most unacceptable scenarios involved either plagiarism or sexual harassment, as might be expected.  Scenarios involving a hostile work environment—either brought on by workplace violence, threats, or offensive jokes—were found to be slightly less abhorrent but still pretty undesirable.  Other uncomfortable work culture scenarios were judged to be undesirable, slightly more than some scenarios involving diversification issues.  Situations that were assessed as only mildly uncomfortable or neutral were some of the most ambiguous and depended on the reader’s interpretation of information not given.  They ranged from a supervisor insisting on a student working weekends to a male faculty candidate thinking it’s unfair if a woman’s gender gives her success while job hunting.  The most positive and desirable scenarios involve astronomers who mean to be supportive of their colleagues. 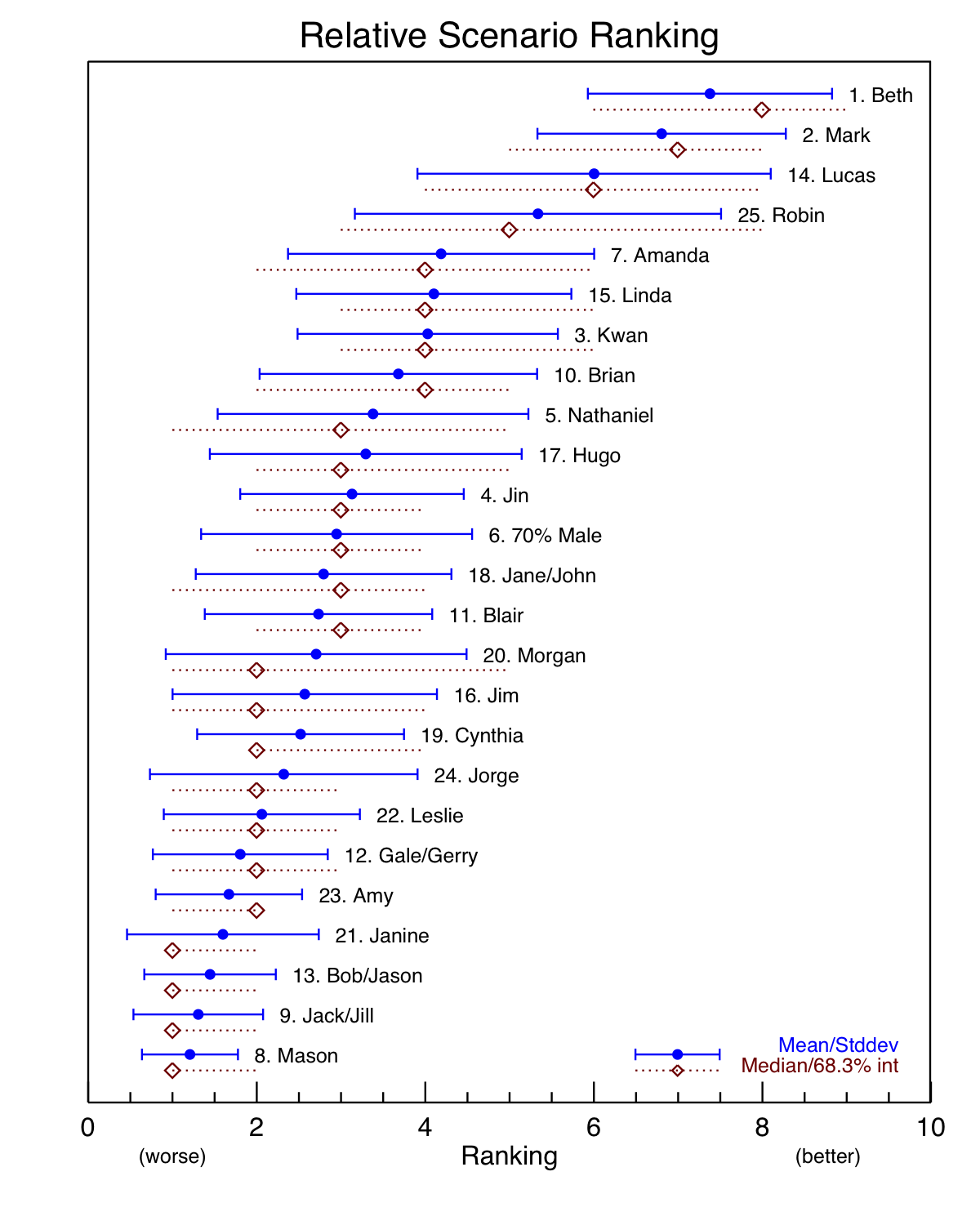 (caption) The relative rankings of 25 scenarios from the Ethics and Diversity Poll.  The community thought the worst was when Mason’s idea was plagiarized by a senior researcher, and that the best was when Beth was given encouraging words by her supervisor at AAS.  Read more about the scenarios and rankings here.

Although we’ve presented the quantitative results here, we’d like to emphasize that this was not the goal of the activity.  There are no right answers as to how the rankings should have been as you can’t compare the evils of harassment with discrimination or plagiarism.  Rather, we want to stimulate introspection, personal reflection, and discussion on themes that underlie these scenarios.

Knowing that all of these scenarios are based on situations that recently occurred, you should ask yourself again whether or not you’re comfortable with them; if you disagree with the community (or if the community is split on the issue), why is that? Is it because you are actually an outlier or did the ambiguity of a scenario leave room for interpretation?  Would your answer change if more details were given?  More personally, have you witnessed (or experienced) a scenario like this yourself?  How did you react, and how strongly did it depend on your point of view or how much/little information you knew?

“This exercise is too ambiguous”

Based on written feedback, about 10%–20% of participants thought this poll was too ambiguous; they let us know about it.  They thought we should have clarified the scenarios further—asking the respondent to take a certain person’s point of view to cut down “spurious” answers.  These scenarios are hard to judge (we probably would have answered differently if we took the survey multiple times), and had we been most interested in the community’s absolute ethics standards, it would have been conducted in a more scientific way.

Instead, our primary aim was to create an internal dilemma for participants, forcing reflection and value decisions that go beyond typical scientific rationality. Why would we do such a thing?! Well, it makes it all more like real life.  Take the situation with graduate-student Jin wanting to participate in outreach activities, and his supervisor tells him it’s a waste of time.  If you’re Jin, you might think this is a really horrible thing.  If you’re Jin’s supervisor, then maybe you think Jin needs help realizing the commitment necessary to be an internationally competitive astronomer, and you’re doing your best to make sure he succeeds.  Your point-of-view changes the situation dramatically, and the reason the situation is in the “gray zone” is because Jin and his supervisor aren’t on the same page.  Your background experiences (whether you’re a student or supervisor and whether you yourself value outreach) probably influenced your answer.  Most importantly, by not providing further clarification, you, the participants, had to put a little extra thought into who’s perspective you thought was most relevant or important given the severity of the situation at hand.

For better or worse, there are plenty of life/work situations where we don’t hold all the cards but still carry strong feelings about what’s right and wrong.  Ambiguity, emotion, and personal values are at the core of human interaction.  They are the basis for judgements which impact our professional relationships, whether or not we have all of the objective information needed to form those judgements.

More! What can I do?

Please check out the extended report here if you want see the rank distributions and to read more participant reactions on all 25 individual scenarios as well as our reflections, from the perspective of those who put the scenario list together.  Also: