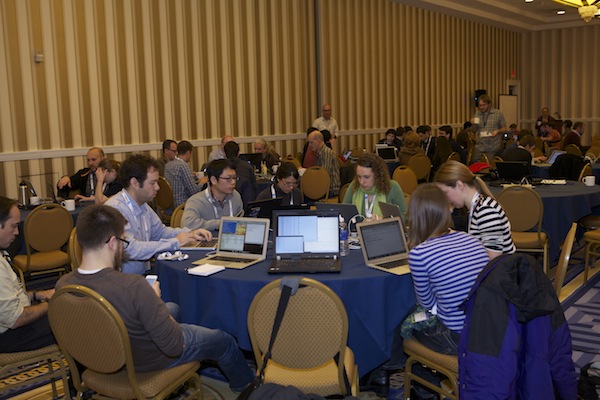 On Thursday, January 9th, a band of intrepid astronomers gathered for the second AAS Hack Day. Hack Days are traditional events in software development circles, where people with skills, ideas, and the willingness to dedicate a day of their lives get together to make interesting projects happen. Much like the first Hack Day at AAS 221, the day began with pitches for hack ideas ranging from novel data analysis techniques to new public outreach sites. People grouped up around projects that intrigued them and, fueled by visions of useful software and more importantly by donuts (generously provided by Microsoft and Northrop Grumman), labored all day to bring their ideas to life before David Hogg called the 5 o’clock presentation deadline. And what a slate of projects they produced!

Note: these presentations are listed in the order they were given and I noted only who was giving the actual presentation. If I didn’t catch your name, or if you did work I didn’t credit you with, leave a comment below! 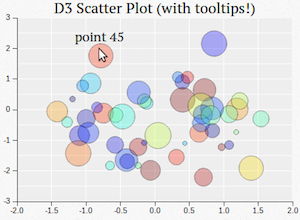 Jake VanderPlas implemented some new features in mpld3, the backend he’s been working on to allow matplotlib to directly generate interactive plots in-browser using the Javascript d3 library. Jake added a plugin framework to mpld3 that allows you to add snippets of HTML/CSS/Javascript code to be executed for a given plot. To demonstrate this, he wrote a plugin to add tooltips that pop up when your mouse hovers over the plot points in-browser. There’s a more detailed writeup, along with information about the mpld3 backend and bonus interactive plots to play with, over at his blog.

Aaron Meisner built a similar interactive plugin for IDL that let you display spectra when hovering over the pixels of FITS files.

Ben Weiner is planning to build a website that allows you to tag ArXiv abstracts with your own annotations, so you can better organize papers of interest. Ultimately the tags should be exportable to reference managers like Mendeley and Papers. Public user tags will also act as a crowdsourced paper recommendation/classification system. During Hack Day he mocked up a prototype that scrapes the ArXiv RSS feed and allows you to type in tags with Javascript forms. He’s currently working on converting it to a web application. Laura Watkins, Dan Foreman-Mackey, Adrian Price-Whelan, Erik Tollerud and Peter Teuben helped and offered suggestions, while Greg Novak suggested the utility of public tags. 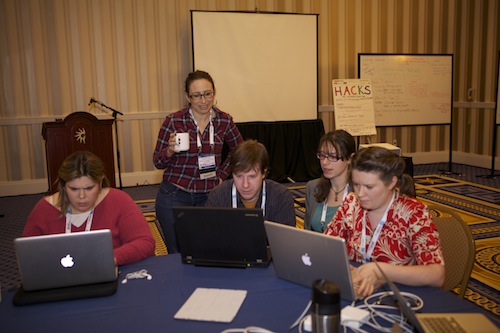 Astrotweeps, a project inspired by @AstroCanada, was put together by Meg Schwamb, Niall Deacon, and Demitri Muna. Like AstroCanada, Astrotweeps comprises a blog and a twitter account that are both taken over by one astronomer a week in order to showcase their research and educate the public about their specialty. If you’d like to commandeer the blog for a week, you can sign up! The Astrotweeps folks also showed off a sweet logo put together by Alex Parker and mentioned how they made use of If This Then That (IFTTT), a website that allows you to set up “recipes” that sync up different services like Twitter and Facebook. With an IFTTT recipe, when an event happens on one service (“if this”) it triggers an event on another (“then that”).

Ellie Newton, Kelle Cruz, Betsy Mills, and Peter Williams put together Ellie’s idea from dotAstronomy 5: Astro4Astro, a one-stop-shop for astronomy content. Astro4Astro aggregates blogs, facebook posts, and twitter feeds to make it easier for astronomers to find interesting new content. Posts are grouped by subject areas such as “Computing” and “Women in Astronomy.” They also made use of IFTTT recipes to coordinate across various platforms, allowing Astro4Astro to aggregate from lots of different sources. 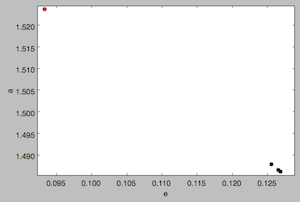 Next Marco Juric presented the totally awesome project that I was incidentally hacking on for most of the day: orbfind, asteroid finder software meant to be used by the LSST. In brief, the current method for finding asteroids involves detecting the short streaks made by moving asteroids in hour-long LSST exposures, then matching those streaks across images to build up an orbit. Unfortunately this problem scales badly in both computational power and memory required, and a simpler approach could save lots of time and money. The idea behind orbfind is simple: instead of trying to match streaks, simply take one observation, calculate all possible orbits that could fit it, then store that data in a single six-dimensional heatmap. As more observations are made, “hot spots” should form around the correct orbital parameters. We made a good-faith effort to get a pathfinder ready using pyephem and orbital element code. However, as you can see from the plot to the right of semimajor axis vs. eccentricity, the code (black dots) still needs a bit of coaxing to find Mars (red dot), let alone asteroids.

Peter Teuben suggested a UI hack for image stretch controls to Jonathan Fay of Microsoft’s WorldWide Telescope project, who implemented it then and there. The feature should ship in the next version! 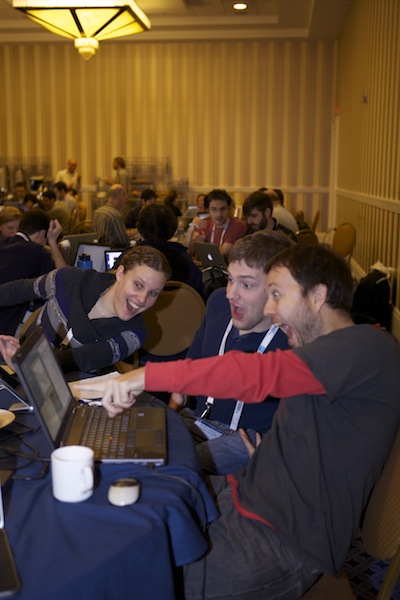 One clever hacker wrote a bot to do something I’ve wanted to do for a long time: pull the TeX source of papers posted on astro-ph and scrape out the % comments for amusing tidbits. You can see the best of what it’s recovered live at @OverheardOnAph.

Fabo Feng and Lia Corrales worked on software to calibrate amateur and citizen science images for scientific work – a subject near and dear to a transient astronomer’s heart. The Astrobridge package can generate darks, flats and bias images, account for many different kinds of CCDs and CMOS cameras, and produce a final image in FITS. You can see a great example of it in action here.

Sara Gettel worked on compiling a comprehensive list of tips, tricks, and routines to map common IDL behaviors to Python and ease the IDL-Python transition, all intended for Demitri Muna’s website on the subject. Being in the midst of such a transition myself, I was greatly intrigued, and we’re hoping to put together a post on the subject soon.

Lia Corrales and Emily Rice also used IFTTT to integrate the tumblr and twitter accounts for Emily and Summer Ash‘s project STARtorialist, a blog featuring astronomy-themed fashion and the fine astronomers who wear it.

Adrian Price-Whelan made the dumb-aas talk title generator, which is now live on AstroWorse. Because why do better when you can do Worse? For a slice of background reading, you can peruse his work on using machine learning to group talks and posters at AAS. 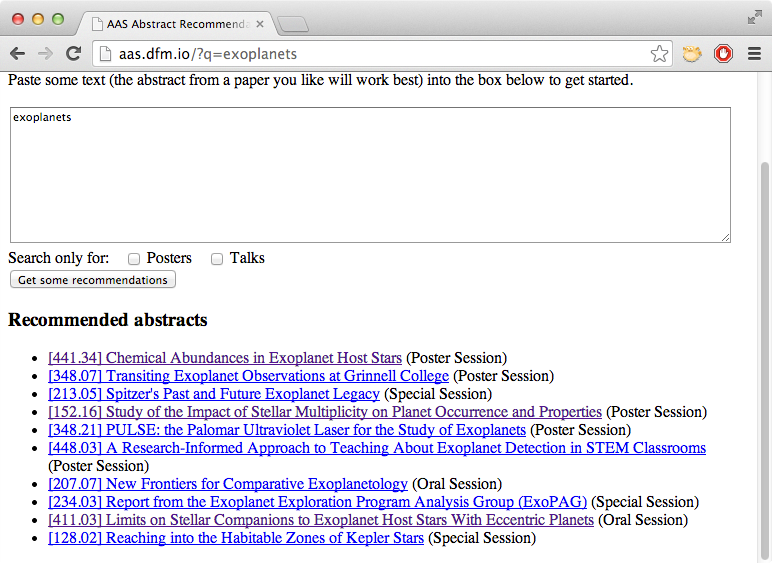 Dan Foreman-Mackey, Dylan Gregerson, and Dmitry Malyshev were thinking about optimal pathing through AAS and built a tool to recommend talks and posters. Given some input (keywords or an abstract of interest) it computes related AAS talks and posters you might also like. There were calls in the room for the AAS to have this on the website; hopefully we’ll see it in production by the Seattle meeting.

Peter Williams at Harvard displayed some work on using reveal.js and d3po for interactive slides in HTML.

Andrej Prsa, Kyle Conroy, Nick Earl, and Meredith Rawls worked on python routines for detrending data. The software is still under development, but you can play with Meredith’s periodic lightcurve generator in the meantime.

And lastly, Amanda Bauer closed the session by presenting a short video using Worldwide Telescope to put together a Youtube version of Dirty Space News.

Props to all the astronomers who dropped by for the Hack Day and helped out, whether you stayed for a few minutes or all day. Hack Days are great opportunities to not only meet other astronomers, learn new programming techniques and tools, and work on fun projects, they’re also an excellent chance to throw around wild project ideas in an encouraging environment. Which all boils down to one point: you are what makes Hack Day fun! No matter what your subfield or level of programming skill, Hack Day has a place for you. See you all next year in Seattle!