This article is the second of a three-part series that is cross-posted from the ADS blog. In this series, the ADS team has performed an analysis of citations to astronomy journals over the last 20 years. This post is written by ADS project scientist Michael J. Kurtz and Edwin Henneken, who works on the ADS system development and operations.

This is the second of a series of blog posts measuring the journals that publish astronomy research articles, using citation statistics with a number of different indices. In this post, we examine the performance of individual journals with respect to each other over time. We use the data described and published in Part 1, which looked at some of the integrated properties of the sample, such as citation counts and h-indices. In Part 3, we will look into some of the properties of the indices.

Much can be gleaned from these lists; we recommend the reader avails themselves of this opportunity. We will illustrate some of the results by a little cherry picking.

There are (at least) three main takeaways from looking at these lists:

B. Winners and Losers
As shown in Figure 1 of Part 1, the astronomy literature has been growing over the past two decades. While astronomy has spread its influence into related areas (and this is the point of that figure), the core astronomy literature can be taken as being within the ~50 major international journals of physics, astrophysics, and geophysics in our main sample (listed in Part 1). The growth of this literature has been a steady 4% per year, doubling over the period, consistent with long term trends in many disciplines.

Figure 1 of this post shows the three “winners”: MNRAS, PhRvD, and JCAP, as well as the ApJ, which has had an approximately constant share for the whole period (which means it doubled in size). MNRAS and PhRvD doubled their share (so quadrupled their size), and JCAP began at zero and now has a 3.5% market share.

Figure 2 shows the three “losers”: A&A, ApJL, and AJ, also with the ApJ as a fiducial. A&AS was merged into the main journal in 2001; the A&A line represents the sum. All three journals lost about half their market share during the last two decades. 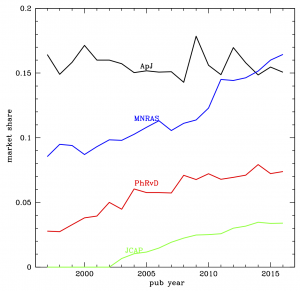 Market share is not the whole story, of course. It is possible to gain (lose) market share by becoming less (more) selective, for example. We define “mind share” as the fraction of citations a journal has relative to the whole field. In practice, we compute this by dividing the citations to each journal by the total “in sample” citations (shown in Figure 2, Part 1).

Note that the number of citations is as measured in the middle of July 2018; each year’s data has had a different period to accumulate citations. Also note that for recent papers (especially 2016) the citation counts rise very steeply with time; this suggests that the error in the estimated mind share for more recent documents will be relatively larger than for the older documents. 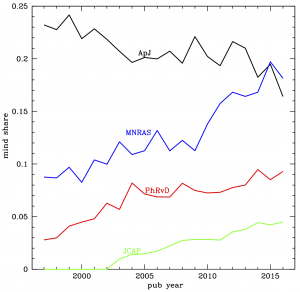 There are (at least) four possible factors in the decline in mind share of the ApJ:

We suggest that the first factor is not correct and that the ApJ has not decreased in quality. All the other three factors contribute in some way. The ApJ has provided a standard target of excellence for other journals to aspire to, and many have. Older ApJ articles are cited more than the average older article. The end of the wall of paper journals in astronomers’ offices affected the leading journal, the ApJ, more than any other.

Were they to be gaining market share by lowering their standards, the slopes for MNRAS, PhRvD, and JCAP in Figure 3 would be shallower than in Figure 1. They are not; in fact they are slightly steeper, indicating an increasing rather than decreasing relative quality. Notice that MNRAS has a larger mind share than the ApJ for both 2015 and 2016. 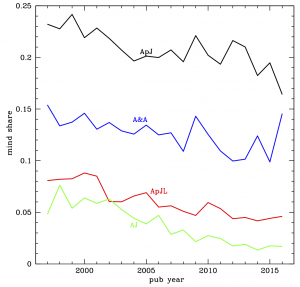 Twenty years ago, the main journals in astrophysics began to publish electronically. At the same time, the number of ApJ articles preprinted in the arXiv exceeded 50% for the first time (it is now about 90%), and the number of astronomy research papers downloaded via the ADS exceeded the number read in all the world’s print libraries, combined, for the first time. The 20 years of this study correspond to the new era of electronic documents.

As the four figures (and the h-index discussion) show, this era has not been kind to the journals owned by the American Astronomical Society; the ApJ, ApJL, and AJ have lost their intellectual dominance. The recent structural and organizational changes to the AAS journals program may be understood in this light.

In Part 3, we will discuss per article citation rates (AKA Impact Factors).